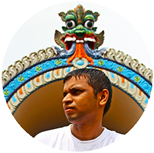 / Awards & Recognitions, I have received

Product designed and devloped by me was selected to get showcased at Nasscom Product Conclave (NCP), the India's largest platform for Product and Startup Companies to connect with Software Product leaders.

Selected at Google India - Interview as one of the Top 5 Finalist out of 16,000 + people. Created Google Kids – a search engine for kids prototype for demonstrating during my Google India Interview.

Some of my previous Web products (View 1, View 2) have received a great response from China and Japan. Also ranked as world’s top 50 hosted blogging platform by Alexa.com.

/ My Works has been featured in

Wikipedian, contributed for more than 100's of Wikipedia pages in various topics in Computer/Internet Technology category. Contributing writer of DeveloperIQ Magazine on the latest Web Technologies.

Personally, you won’t find me on Facebook. To stay in touch or Want to work together? You can text me at: balakumar.muthu@gmail.com

Creating Your Own Mobile Codes

Mobile codes are codes in the same way as ordinary barcodes are, but their matrix structure can hold more information. Now we too can create our won mobile code with a few simple clicks to write a message, your phone number, or a link to a website and change it into a mobile code, which can be scanned using a camera phone. Simply start typing away the text you want to convert and watch the mobile code being generated instantly. Once done, name it in any way you want and scan, print or save it for sharing the way you choose best. >>